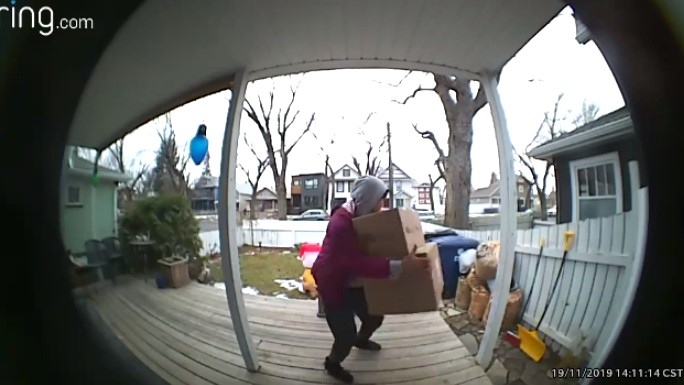 A door bell camera video appears to show two people taking a shipment of medical supplies from the porch of a Riversdale home.

On Tuesday, two women were caught on camera stealing boxes filled with bandages for a child with a rare skin condition. The suspects were arrested and charged with theft on Wednesday evening, according to police.

With Black Friday and Cyber Monday around the corner, police are warning people to be vigilant about their online shopping orders to avoid theft.

“We want people to be aware of things they can do to protect their purchases,” Saskatoon Police Service spokesperson Kelsie Fraser said.

Fraser said the family’s security footage was vital in the arrests made on Wednesday, and can be useful to deter thieves.

“The doorbell footage that came from the residents was instrumental in helping us solve this case,” she told reporters.

Request a signature upon arrival

To ensure your delivery is getting into the right hands, Fraser recommends choosing the option to sign for delivery.

“You could also have it delivered to a post office where you can pick it up,” Fraser said, also suggesting workplaces deliveries if it’s allowed.

Fraser advises online shoppers adjust the delivery date for a time you’ll be home to avoid having packages sitting exposed.

To keep tabs on your shipment, Fraser suggests opting in for tracking notifications and updates.

“So you know exactly when it will be there,” Fraser said.

With online shopping becoming more popular, so are parcel security boxes. Fraser said the hardware can be useful in avoiding porch pirates.

“It’s to make sure the things people are spending their hard-earned money on, are making it to them,” she said.